In Autumn 2017, pupils at Bunscoil Loreto in Co. Wexford took on the challenge of planning and running their Scholastic Book Fair. Teachers Susan Kavanagh and Therese Kehoe have written up their experience.

This was our school’s third Book Fair, so this year we decided to participate in Scholastic’s Book Fair Takeover. To be honest, from a teacher’s perspective, I was a little dubious as I like to be organised and in control myself but despite this, we decided to give it a go, and I can only say how absolutely thrilled I am that we did. 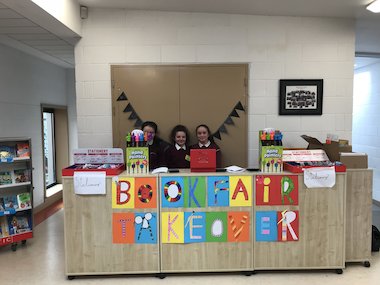 From the very first time we explained what the Takeover was to both our 6th classes they were enthusiastic and immediately began discussing what they could do to enhance the overall Book Fair and make it appealing to the whole school. This was going to be a big undertaking with over 700 pupils in our school, but the 59 pupils in 6th class embraced the challenge and did a fantastic job.

They approached the Takeover with a very serious attitude and organised and ran it similar to a business from the very onset. The day the jobs were advertised was a very exciting day and the children adopted a very professional approach to their job applications. They wrote their own CVs, submitted very detailed cover letters and each completed job application forms. They approached other teachers and members of staff to be their referees. They all chose a job that suited their individual strengths and interests. The more creative and artistic children quickly opted for the roles of ‘Advertising Specialists’ and immediately began designing and producing posters and advertisements which were placed all around the school. Other jobs were also very popular and a job was found that suited every individual. The children wore their name tags, which also had their job title, with pride. Throughout the whole process, they learned invaluable lifelong skills.

In the weeks prior to the Book Fair the advertising specialists were busy as bees. They organised two in school competitions, offering book fair vouchers as prizes. The first competition was ‘design a book cover’ covering classes from Junior Infants to 2nd class. The second competition was ‘write a book review’ for all classes from 3rd to 5th. They took this role very seriously. They organised posters, advertised in all 24 classrooms and arranged a panel of judges. All the winning entrants were displayed on a noticeboard throughout the duration of the Book Fair. 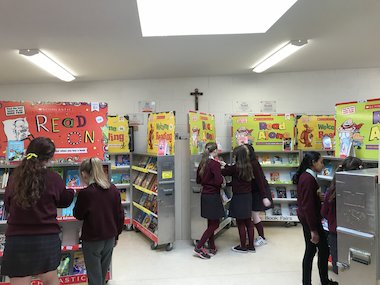 During the week of the fair the ‘Browsing Supervisors’ organised a timetable for all classes to visit the fair and browse with their teachers. They also took their role very seriously. They recommended books, helped parents, pupils and teachers browse and find suitable books.

Our Book Fair remained open for an hour every day after school and all the pupils volunteered to remain after school hours to help. Some were even disappointed that they couldn’t stay every day to help.

Our cashiers also had a very important and busy (sometimes hectic) role. This is the role I was most anxious about! But there was absolutely no need for me to be anxious. The pupils handled all the money, recorded all the sales, did end of day totals and balanced the sheets with the cash taken in. They did a fantastic and very professional job. The accountants were on hand to oversee the money at all times. They were available to provide change and double checked the balance sheets at the end of every day. We also had two managers who were present every day. They were very dedicated and carried out their role in a very mature and professional manner. They oversaw the overall organisation of everything, from the advertising, the competitions, to the day to day running of the fair.

Our Book Fair Takeover was hugely successful. Overall the whole week was full of excitement and the children’s commitment to its success was evident from the very beginning. We set a target of €4,000 , which is what our 2012 Book Fair sales totalled. Our final total was €6,465.89, which was phenomenal. The children and teachers were utterly amazed at the final figure. We are all so proud of how hard the pupils worked, and they are the reason it was so successful. After this experience, I can honestly put my hand on my heart and recommend the Book Fair Takeover to any school that is considering it.